The last few months our group has dedicated to nanofabrication. It is a lot like cooking in that we talk a lot about recipes, and we get to wear white overall suits which make you feel like a chef. It is however much more strict than cooking as every recipe has to be perfectly tweaked for the final result to work. I have decided to explain how nanowire devices come about cookbook-style.

The main ingredient is a nanowire. It is of course highly recommended to get the best and fresh nanowires, here we shall use indium antimonide wires grown in Eindhoven, but we also have other great recipes for example with silicon-germanium grown in Los Alamos. Great, so put nanowires aside, we will need them a bit later.

We start by preparing the substrates. Here again our recipe is a little extravagant as we shall be using substrates from France, but you can use substrates from your local market. We prepare a whole 2” wafer and then cut it into smaller pieces for final devices. The fist step is to fabricate markers, they are needed as coordinates and reference points for other layers of nanofabrication. They are produced by electron beam lithography which can define the cross-shaped patterns shown below. Make sure you spin PMMA before doing lithography, and then develop it in MIBK for about a minute.

The final pattern is obtained by evaporating titanium and gold and liftoff of the rest of PMMA. You need to evaporate these metals in vacuum, so make sure you have an electron beam or a thermal evaporator. While these crosses are relatively large, the meaning of nanofabrication really comes to life when we form the layer of gates, also by electron beam lithography. These are parallel lines that can be as thin as 20 nanometers. In the picture below you can see an image of gates in a standard microscope in pink. The pink rectangle in the middle is so dense that individual gates cannot be resolved. You also see yellow gold markers in the corners, they were used to position the gates in the center. A cyan rhombus is a layer of hafnium oxide dielectric which will eventually separates gates from nanowires to help avoid shorts. This layer is produced by atomic layer deposition, in which organic molecules carrying hafnium atoms coat the subtrate and then disintegrate leaving behind a single layer of oxide.

After these steps our substrates are cut into 10 mm squares and get shipped from Grenoble to Pittsburgh. Here we take the Dutch nanowires and place them one by one onto the gates, as shown in this video.

The nanowire is a bright white object in the center. You can also see better the gates in the picture above because this picture is taken with a scanning electron microscope. Although these pictures are always in grayscale reflecting the color of electrons.

All this is done in the cleanroom which looks like this: 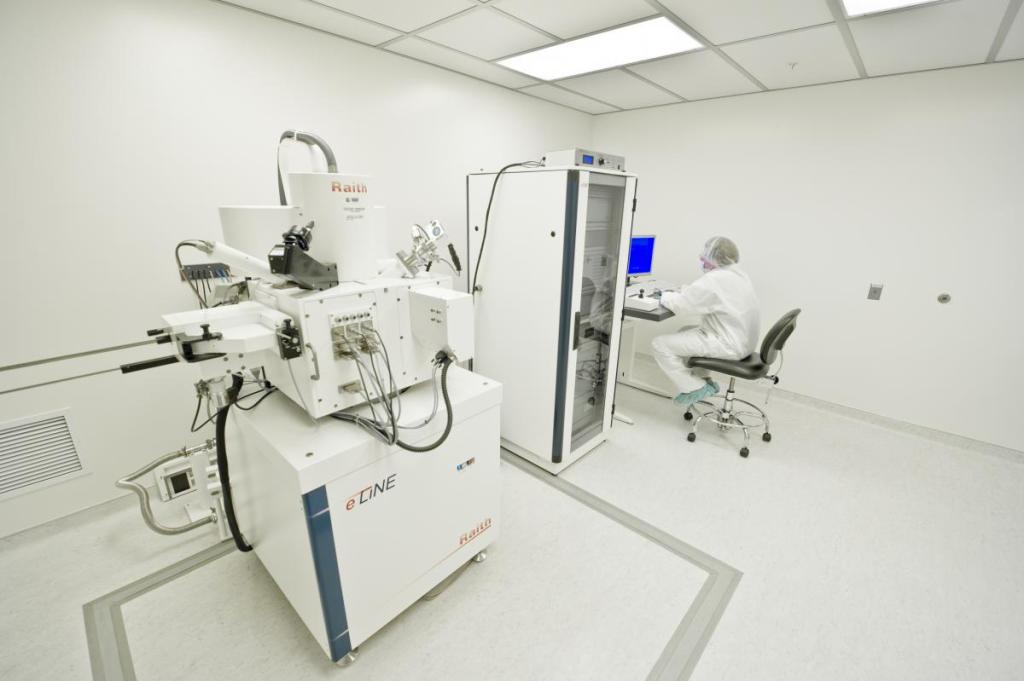 The last step is to contact the nanowire with electrodes. We take a picture of exactly how the nanowire lies on the gates, and then design contacts (in a computer) to cover the tips of the wire and its sides. We will later pass current and measure voltage across the nanowires through these contacts, that is the experiment part of our work.

We use the electron beam lithography machine shown in the picture above to write the pattern of contacts on top of the nanowire. The substrate and the wire are coated with PMMA which is a polymer that gets broken down by a beam of electrons during lithography. Where the molecules of PMMA were broken they come off in MIBK leaving openings. Metals like titanium and gold can be deposited in those openings.

Finally, rinse the chip in acetone and isopropanol and you are ready to measure! Enjoy your experiments.